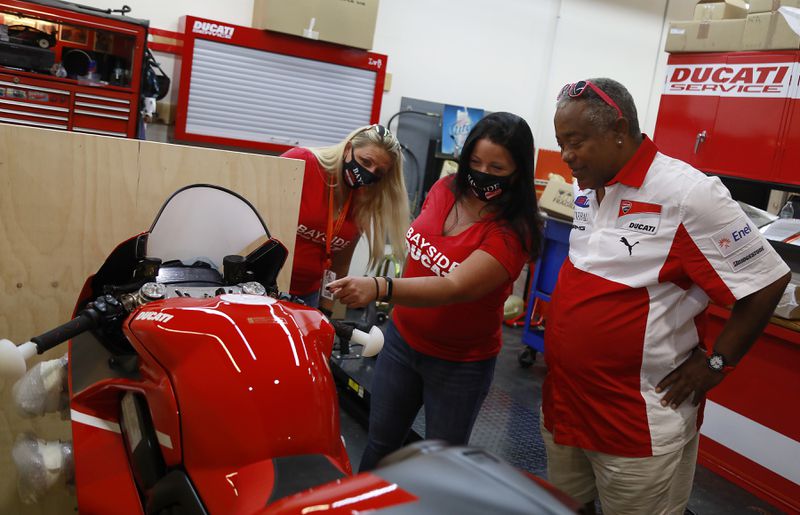 PORTSMOUTH — Maurice Slaughter will be hard-pressed to find the perfect Christmas present for his wife, Cynthia, this year.

The chairman and chief executive officer of MS Family Enterprises Inc. — which owns Bayside Harley- Davidson/Ducati in Portsmouth — just received a 2020 Ducati Superleggera V4 from his bride of almost 37 years.

The price tag for the new speed demon, handmade in Italy, is $100,000, making it the most expensive Ducati to date. Sporting a 998cc V4 engine that produces a maximum of 224 horsepower, it is also the most powerful Ducati ever.

“Unbelievable,” Slaughter said Wednesday when it arrived at his dealership. “This bike, as an enthusiast, is just unreal. It’s a piece of art. The craftsmanship is unreal.”

And Slaughter, who is surrounded by bikes in his dealership by day and his personal motorcade of six Harley-Davidsons by night, is the true definition of the “enthusiast.”

Beaming ear to ear, Slaughter could not contain his joy to add the superbike — the only one on the East Coast — to his collection. The journey to ownership began two years ago, unbeknownst to Slaughter.

It was then, during a trip to Italy, that the Slaughters toured the Ducati factory and Cynthia Slaughter learned all about the elite bike. The Superleggeras is made in batches of 500, and can only be obtained through pre-orders. Ducati rolls out special, limited-edition models every five or 10 years. 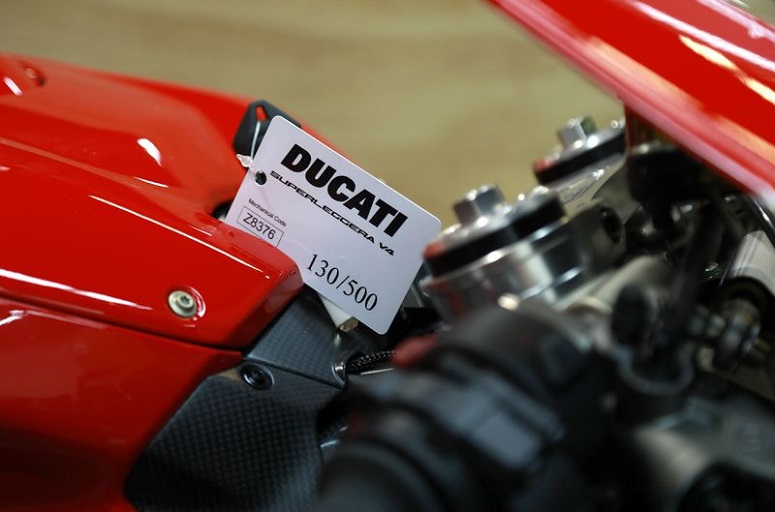 A tag marking a Ducati Superleggera V4 as one of 500 in existence is visible after the motorcycle was unboxed at Bayside Harley Davidson on Wednesday, Sept. 16, 2020, in Portsmouth, Va. (Kaitlin McKeown/Virginia Media) Cynthia Slaughter plopped down a $20,000 deposit while her husband was in another part of the factory. She shared the surprise with their two children, Tiara and Will, but otherwise kept it a secret.

That lasted until she was notified that it had completed its journey from Italy via ship to the port in New Jersey last week.

“She had to tell me then, because the bike was going to show up at the dealership,” Slaughter said. “I really didn’t believe her at first.”

Slaughter, who owns two other dealerships, Outer Banks Harley-Davidson near Kitty Hawk and District Harley-Davidson/Bugati/BMW in Gaithersburg, Maryland, is no stranger to business ownership. He began as a Burger King franchisee, moved on to being a Toyota dealer and then became a Harley-Davidson dealer in 1998.

“My Daddy’s been in the grease business all his life: hamburger grease, auto grease, and motorcycle grease. The bottom line is dreams do matter,” Tiara Slaughter said. Claudio Domenicali, chief executive officer of Ducati, said in an article in Slash Gear, a website that focuses on cars, gaming and gadgets, that every product crafted by the company is a declaration of its lust for perfection. “But none is comparable to Superleggera,” he said. “In this project, we modeled the most advanced carbon fiber into futuristic aerodynamic-driven shapes. Here we realized our dreams as engineers, manufacturers, and passionate riders.”

Another perk that comes with a Superleggera is the opportunity to ride a Panigale V4 R, a Ducati racing bike, on the Ferrari racetrack in Italy. 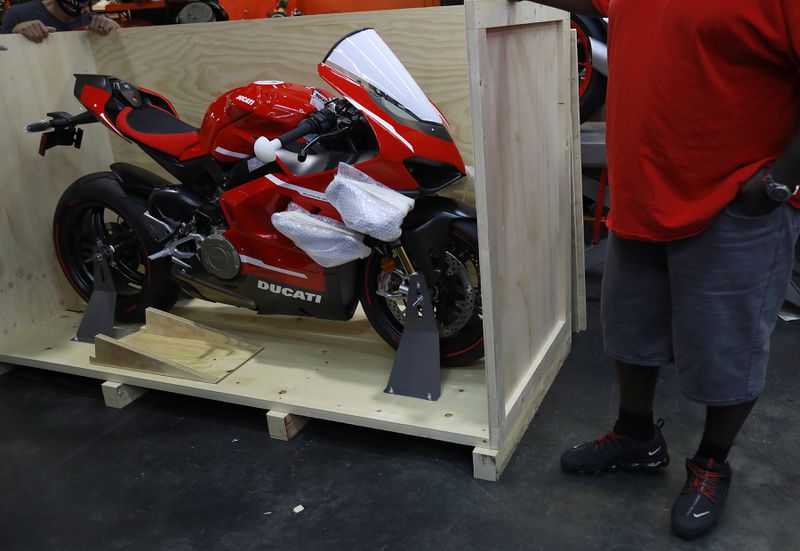 A Ducati Superleggera V4 motorcycle sits in a crate as a team helps unbox it on Wednesday, Sept. 16, 2020, at Bayside Harley Davidson in Portsmouth, Va. (Kaitlin McKeown/Virginia Media)

“That’s a really neat thing and honor to do,” Slaughter said. “Out of the 500, 30 of the people get to spend another $20,000 and ride Ducati race bikes with Ducati racers on the racetrack.” Slaughter said his skill level isn’t up for the racing ride, but he will take a spin on the Ferrari racetrack. Before he takes his new baby out on the road, Slaughter will display it in his dealership for the next few weeks.

“Anybody that’s an enthusiast, whether it’s autos or motorcycles, this is the kind of thing they’d appreciate seeing,” he said. “This is a once-in-a-lifetime thing.” 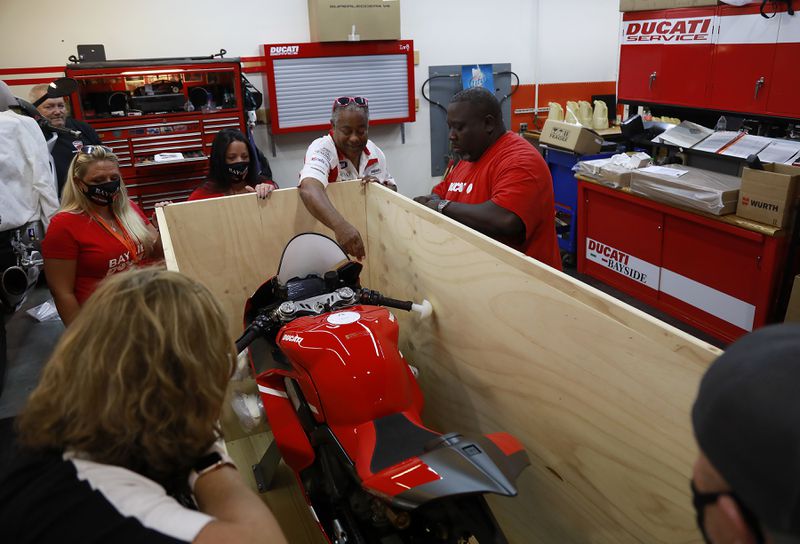 Then he will carefully pack it up and trailer it to his dealership in Gaithersburg for another month of display. “I can’t wait to drive it,” Slaughter said.

As for his wife — who has her own motorcycle license — she said she doesn’t get on motorcycles with her husband. Cynthia Slaughter did say, in a joking manner, "I can’t wait to see my Christmas gift.”