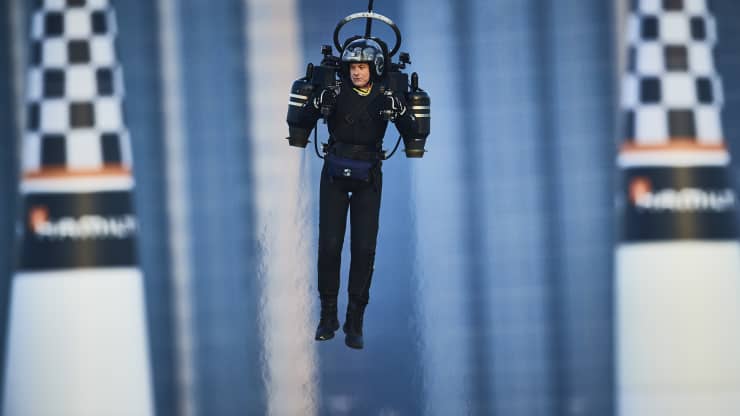 It takes visionaries like venture capitalist Tim Draper to reimagine the future of transportation and back ideas many consider futuristic pipe dreams. But this renown Silicon Valley venture capitalist who was an early investor in Elon Musk’s Tesla and SpaceX ventures has a knack for spotting mobility trends early in the adoption curve.

One he sees taking off within a decade is vertical takeoff and landing aircraft (VTOL) technology that enables human propulsion. Two start-ups Draper Associates has invested in are on the leading edge of this new mobility movement: JetPack Aviation and Gravity Industries Ltd.

The companies both focus on VTOL technology to make travel and commuting easier and more flexible. And they both have captured the imagination of people worldwide.

Gravity Industries has developed a real-life ‘Iron Man’ flying suit. The exo-skeleton jetsuit  has two jet engines attached to each arm and one engine mounted on the back that allows the pilot to vertically take off and fly using the pilot’s shifting body-weight and arms as its thrust control; and JetAviation is prototyping the Speeder, a fully stabilized flying autonomous motorcycle that can fly one or two individuals at over 250 mph.

Getting the idea off the ground

JetAviation, led by CEO and founder David Mayman, has raised $5 million in start-up capital to date. It also created a jetpack called the JB12 Jetpack that can be worn like a backpack. Mayman himself has demonstrated the personal aerial jetpack numerous times including when he flew with it around the Statue of Liberty in 2015. The device has been certified by the FAA, and it landed a CRADA agreement with the U.S. Navy Special Forces for use in short-distance troop transportation. Since then, it has been demonstrated in nine countries to live audiences of over 300,000 and TV audiences of billions including at a Formula One event in 2018. It will start flight testing the JB12 for the military in March of next year.

The jetpack also boasts a lot of features that sound like science fiction: Over 250 mph top speed, and suitcase-sized portability, for instance.

“I think we are now in in a two-dimensional transport society and both of these companies have figured out how to make this technology more practical so anyone can fly and land from anywhere,” said Tim Draper, founding partner of Draper Associates. “These are exciting and fun to ride.”

As he explained society is at a point where we need to break the traditional commuting models. “Right now, we are stuck in cars, long distances require driving to an airport and getting on a plane. Imagine you can just strap on a jetsuit and take off and fly where ever you want to go. I think VTOL technology is what we are all looking for.”

JetAviation originally focused on the jetpack suit, but also began developing a flying motorcycle that uses VTOL technology in 2018. The company raised seed capital from Draper Associates, Skype co-founder Jaan Tallinn, Y Combinator, Rosecliff Ventures, Cathexis Ventures and a group of angels that it says will fund the development of the Speeder’s first functional prototype.

A rendering of JetPack Aviation’s Speeder, a flying motorcycle being developed that can be used for commercial and military use.Jetpack Aviation 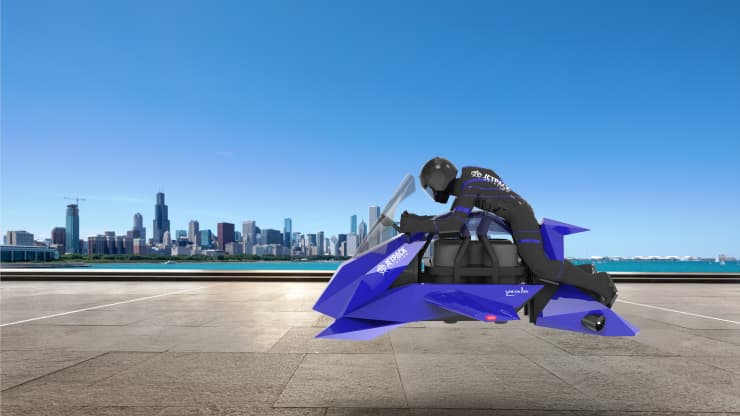 A rendering of JetPack Aviation’s Speeder, a flying motorcycle being developed that can be used for commercial and military use.Jetpack Aviation

The Speeder provides a fully stabilized ride that’s either pilot-controlled or fully autonomous. It can take off and land vertically. There are no exposed rotors systems, which make it a lot safer and easier to operate than a lot of other VTOL designs and helicopters, and the company says it can also be refueled in less than five minutes, which is a dramatically shorter turnaround time for powering up versus an electric vehicle.

Its jet engines are fueled by diesel since battery power is still too low for it to be used to fly long distances using electric propulsion.

According to Mayman, the Speeder, should be able to provide quick cargo transportation for emergency services and military, (its first planned uses before moving on to the consumer market,) in a much shorter period.

“It takes off like a helicopter and can carry over 600 pounds of pilot or cargo,” he said.