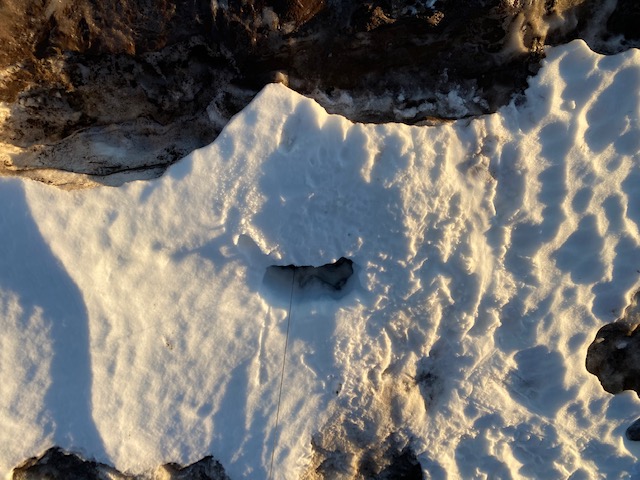 The woman had fallen into the crevasse while climbing and was unable to climb back out. The SAR team was meeting with fire fighters from the Burlington Fire Department when they got the call for the mission at about 4:30 p.m.  After flying back to NAS Whidbey Island Ault Field to refuel, the team set off toward Mount Rainier and were on station by about 5:40 p.m.

The SAR crew located several climbers on the glacier who indicated the general direction of the fallen climber.  An exhaustive search began with the SAR crew searching several crevasses nearby by sending crew members down into them via hoist.  Finally, the crew spotted a small opening in the ice with footprints around it.  A SAR crew member sent into the small crevasse found the fallen climber at approximately 40 feet down.

The climber was hoisted out of the crevasse and it was determined she had no major injuries. The SAR crew transferred her to Mount Rainier National Park Rangers and an awaiting ambulance by about 6:40 p.m.

The Navy SAR unit operates three MH-60S helicopters from NAS Whidbey Island as search and rescue/medical evacuation (SAR/MEDEVAC) platforms for the EA-18G aircraft as well as other squadrons and personnel assigned to the installation.  Pursuant to the National SAR Plan of the United States, the unit may also be used for civil SAR/MEDEVAC needs to the fullest extent practicable on a non-interference basis with primary military duties according to applicable national directives, plans, guidelines and agreements; specifically, the unit may launch in response to tasking by the Air Force Rescue Coordination Center (based on a Washington State Memorandum of Understanding) for inland missions, and/or tasking by the United States Coast Guard for all other aeronautical and maritime regions, when other assets are unavailable.

Join the NOAA/NASA science and exploration crews in the deep ocean as they work together to reveal how life can live...
30 Oct
Virtual Events